Who would have thought that a film with Jodie Foster, Dennis Hopper, Joe Pesci, John Turturro, Dean Stockwell, Vincent Price, and Fred Ward would be so, so terrible.  Catchfire (also known as Backtrack) is probably the worst film I’ve seen in the last several years, Coyote Ugly notwithstanding.

Rumors abound as to difficulties on set – Jodie Foster recently let slip that she didn’t have the greatest time acting under Hopper’s direction.  There supposedly once existed a 180 minute cut as well.

Your now run-of-the-mill hitman with a heart of gold story is so hopelessly inept that it only manages to be unintentionally funny sometimes.  The rest of it is just a gigantic disaster.  Questions like: why did Jodie Foster suddenly fall in love with Dennis Hopper when only seconds before she loathed him, where did both of those helicopters come from, and why is Dennis Hopper’s pronunciation of “Anne” so damn annoying, are only the tip of a rapidly melting iceberg.

I forgot to mention: Charlie Sheen’s also in this film as an emotionally confused (that can basically be said for all characters save Joe Pesci who just screams the whole time…and who ultimately took his name off of the film) boyfriend.  Here’s my favorite moment with him.  The poor guy just wants to eat a frozen pizza while his girlfriend (Foster) sleeps.  The best part of this shot?  Look out that window behind them.  Yep, that’s a woman in her underwear and a guy potentially snorting cocaine.  Relevant?  Not at all.  Followed up on?  Nope. 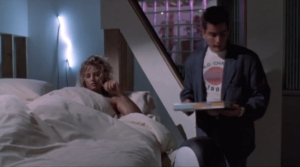 Here’s my favorite sequence of the film.  Anne (Foster) is on the run from both cops and the mob.  They’ve tracked her down so she rushes away and runs through a nearby mini-golf course.  She sees a bell tower obstacle – not a bad hiding place.  Okay, I’m with you, Anne.  So she ducks in: 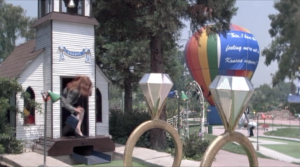 Here’s where it gets great.  First of all, that interior is a whole hell of a lot bigger than the exterior- 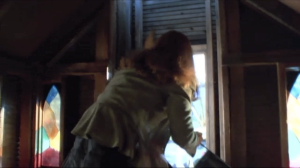 -secondly, Milo (Hopper – the assassin) is in there waiting for her: 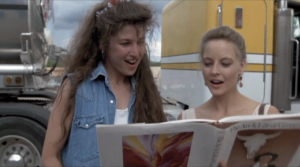 Here’s Milo stopping to get his breakfast burrito after shooting a man and telling his beloved Anne to run (straight into danger).  When you’re hungry, you’re hungry:

I don’t know if I mentioned this, but Milo plays the saxophone in a tanktop.  It’s because he’s sensitive:

And last, John Turturro’s character is possibly the biggest mess.  He seems to be comic relief, but that comedy is derived mostly from pointless, arhythmic reaction shots and his red loafers with no socks: